Writing reports in R Markdown allows you to skip painful and error-prone copy-paste in favor of dynamically-generated reports written in R and markdown that are easily reproducible and updateable. R Markdown reports that are heavy on graphs and maps, though, can yield large HTML files that are not optimized for web viewing.

R Markdown offers a wide range of functions and arguments for full control of image sizes but knowing how and when to use them can be daunting particularly given the differences in how external images are handled vs R-generated figures. We assembled this blog post to help guide you through image processing decision-making as you construct your own R Markdown reports.

NOTE 1: This post is focused on the production of HTML documents and some of our conclusions and recommendations may not apply if you're using R Markdown to create a LaTeX document, PDF or Word document.

NOTE 2: Images in the final HTML documents are responsive – meaning that their dimensions may change with changes to the browser view size. In this post, we report image dimensions as they appear at full size on a computer monitor for reference.

Our examples: one pre-existing image and one dynamically generated plot

In this post we'll work with a pre-existing image as well as a dynamically generated plot. The plot is created using the package ggplot2. Moving forward we're going to refer to our uploaded image as image and the R-generated plot as figure. The image was downloaded to our local drive from here and can be used under the Creative Commons CC0 license.

As a starting point, we can compute the dimensions of our raw image using the readPNG function from the package png. There are two ways to grab the dimensions (height and width) of the image.

NOTE: you can use the same process to examine jpegs, simply swap out png for jpeg. For example library(jpeg); readJPEG(img1).

For our R-generated figure, Figure 1, we are using the ggplot2 package and the built in cars data set. Since the figure is being generated on the fly the dimensions and size will depend on the default settings. For this initial view we've set the width to be the same as the image above.

Default settings for including images and figures in R Markdown 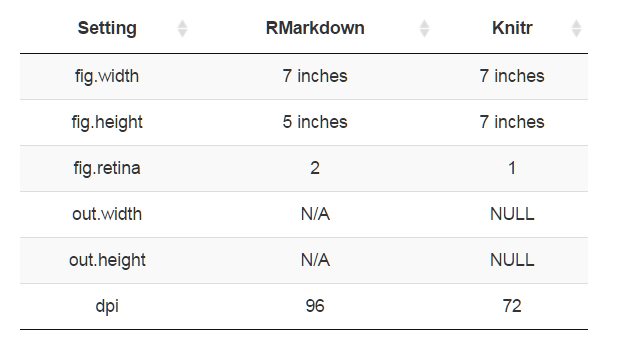 The full documentation including default settings for each package can be found below. We’re also including a link to more documentation about the differences in certain settings as they relate to the knitr and rmarkdown packages.

Using the include_graphics function for adding images and figures

As mentioned above, the figure is included by creating a new plot on the fly with the ggplot2 package.

You'll see below that the default for images is to display them at ½ their original size – you will see below that this is due to the fig.retina = 2 setting (making the same image ½ the size doubles the resolution). This is the default for images using the include_graphics function – original px width * 50%. The external images are unaffected by the fig.width argument (which is set to 7 inches by default). The R-generated figure however is output using the fig.width default of 7 inches.

How images and figures in the HTML document are affected by using fig.width and fig.height:

The fig.width and fig.height arguments only affect the dimensions of R-generated figures as you can see below. The ggplots shown are 2 and 4 inches while the image is still 500px no matter the setting of fig.width.

Unlike the fig.width and fig.height arguments which only affect dynamic figures, the out.width and out.height arguments can be used with any type of graphic and conveniently can accept sizes in pixels or percentages as a string with % or px as a suffix.

Keep in mind that the % refers to the percent of the HTML container. For example, if the block of text that the image is in is 1000px wide then the image will be 200px using 20%.

How images and figures in the HTML document are affected by using out.width and out.height:

Use dpi to change the resolution of images and figures

In general dpi is a measure of resolution – the higher the dpi, the sharper the image. For the most part, this is less relevant when it comes to HTML files given that the default DPI of computer displays are generally set to 72 or 96 DPI. For the web, using the rmarkdown default of 96dpi should be adequate except for retina screens where you may want to use a multiplier in the form of the fig.retina argument (see below).

When you change the dpi of an R-generated plot, larger numbers result in a larger plot unless other arguments like out.width are specified. With external images, there is no way to increase resolution so knitr compensates by making the same image smaller on the page (the same number of pixels in a smaller area).

How images and figures in the HTML document are affected by using dpi:

The fig.retina argument is a resolution multiplier

A retina display is a screen developed by Apple with a significantly higher pixel density than previous models. Prior to the release of retina displays most web images were optimized at 72dpi or 96dpi. On a high pixel density device these images will be displayed as either a smaller image (though still crisp looking) or at the original dimensions (and potentially fuzzy) – this site has a nice discussion. In order to avoid these display issues and create images that look good on all screens you may want to increase the resolution of your images. This can be done with the dpi argument directly or you can make use of the fig.retina argument.

How images are affected in our HTML document when using fig.retina:

The knitr package includes “hooks” you can use to run functions before or after a code chunk to tweak the output. There are two pre-created hooks available in knitr that will optimize PNG images for web viewing: 1) hook_optipng and 2) hook_pngquant. The hook functions are available within knitr but before you can use either of them, you need to install the background programs on your machine.

Note that the built-in optimizers can only be used within R markdown on R-generated figures. To optimize external images see below.

To optimize your images you need to download optipng or pngquant. On a Windows machine you can download the zip files and you'll need to add the location of the programs to your PATH. On a Mac you can use homebrew to install using:

To use either hook you have two steps, first you add the hook in a chunk with knit_hooks$set and then you optimize a specific image by setting the optipng or pngquant argument within the R chunk. (You could also set optipng or pngquant to run on all R generated images by setting a global chunk option with opts_chunk$set()).

In our ggplot example, you can see below that the figures without optipng and with maximum optimization look identical, but optipng reduces the file size from 60kb to 17kb, a 3x size reduction. You can use optipng with a self-contained or non-self-contained HTML document.

If you have external files you have two options: 1) you can use optipng or pngquant outside of R markdown. Using a terminal cd into your folder of images and run the programs. For our sloth images optipng does not result in significantly smaller images but pngquant reduces the files to approximately 1/3 their original size.

Alternatively, you can write your own hook to optimize images in a folder. An example provided by the knitr creator Yihui Xie:

Add multiple images at a time

The path argument in include_graphics will accept a vector of names. If you have a folder of images and want to add all them to your document at the same time simply point to the folder and voila! 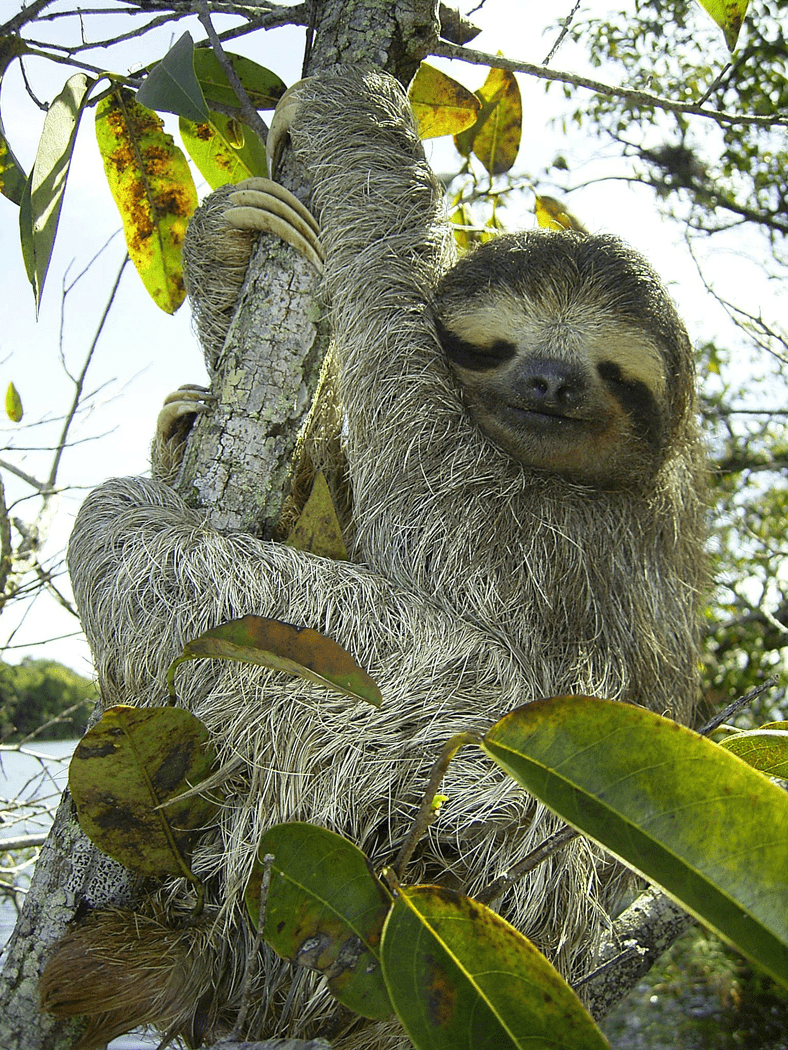 Load an image from a URL

Super easy – point to an image on the web. 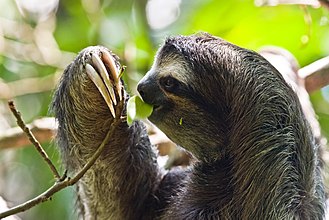 We touched on this in an earlier section – here are two additional methods for adding images to your R Markdown document.

Here we use markdown syntax to include an image.

Here we use raw HTML to include an image

Style your image environment with CSS

You can use CSS to arrange your images, center them, add backgrounds etc. There are several ways to do this depending on whether your changes are quick and local or you want them to apply more broadly.

Use out.extra to apply CSS styles

The knitr package provide the out.extra argument to apply styles to a single chunk.

If you want to make significant styling changes you can create your CSS and include your styles either in your R markdown document directly by including the CSS between style tags like this:

or you can include your styles in a separate docucument and reference this file in the YAML at the top. So, for example, you might create a style.css file and then at the top of your R markdown document you would include:

Then to add a class directly to a single chunk, you can create a new hook that adds the opening HTML tags before and then closing tags after. So here we create a hook that allows us to feed our class to a class argument in the chunk.

Then in your chunk, you can use your new hook like this: 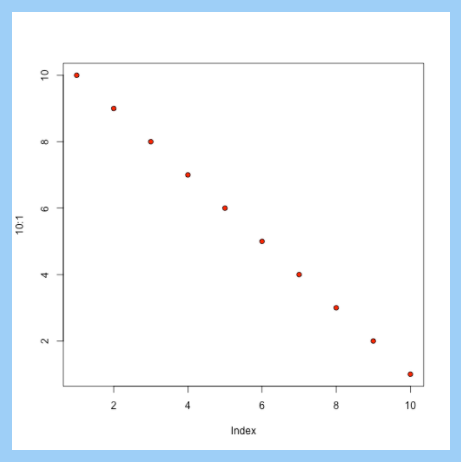 R Markdown provides an useful framework for including images and figures in reproducible reports. But getting the image sizes and resolutions set correctly can be a challenge. Key considerations include: