In a previous post we demonstrated how to animate a path on a Leaflet.js map using the amazing D3 JavaScript library. In this post we will take that code one step further — instead of a path our animation will reveal a series of points representing air pollution measurements through time. The final map looks like this (note the low pollution through Central Park):

1) More than just a path

In our previous post we outlined the steps for creating an animated path from point A to point B using D3 on a Leaflet.js map. That was the first step in a bit of a proof-of-concept. What we truly want is a way to visualize changes in air pollution levels as someone travels through New York City.

Since 2007 we have been part of a team that helped to develop, implement and analyze data from one of the world’s largest urban air monitoring networks. As part of this work, we worked with the team to develop smooth surfaces of estimated air pollutant levels. The surfaces look like this: 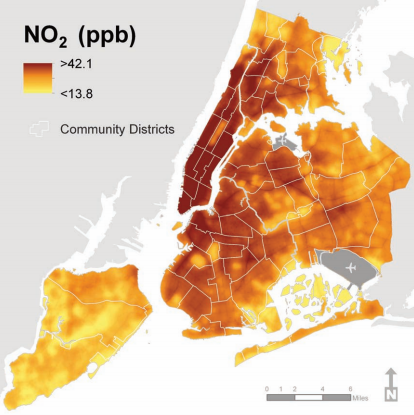 The goal, then, was to create a visualization of air pollutant levels as a bicyclist or other commuter travels through the City. In this case we use a hypothetical hungry commuter who starts at the delicious Jacob’s Pickles on the Upper West Side and then travels to Lomzynianka in Brooklyn for pierogies.

If you would like further background on the air monitoring project, part of the New York City Community Air Survey, you can read some of the reports on the New York City Department of Health and Mental Hygiene website.

2) Create equally-spaced points along our route

We have a blog post devoted to extracting geographic coordinates from a Google directions. This post gets us much of the way to having equally spaced points along our route. In particular, we use these steps:

This gives us a table of points along our route, but not equally-spaced points throughout our route. To get this we add two steps that were not included in the directions on our previous blog post:

Following the code in our previous post you can create a animated map with a marker moving from an origin to a destination.

4) Compute the cumulative path length at each point

With our initial animation we animated along a path gradually revealing the path by gradually lengthening the line. This is relatively simple because we only need to know the time and the total length of the path.

We use D3’s transition.delay([delay]) function to assign a delay that is proportional to the cumulative distance at each point. At the end of a point’s delay we change the opacity for that one point from 0 (transparent) to 1. The formula for this is:

Total time in our case is specified as a total time in seconds (totalTimeSeconds) * 1000 because the delay in D3 is in milliseconds. This extra piece of code looks like:

We added code the compute an animated ticker of mean and maximum pollution values that we put in the legend. With a little more care we could do this computation more efficiently but basically for each time (t) we compute where we are along the line (currentloc). We then use this to filter the segment indices and apply D3’s mean and max functions to extract the required statistic and send it to the legend with jQuery.

For the most part adding the legend is straightforward HTML/CSS. The one exception is adding the color bar. For this I took advantage of John Goodall‘s colorlegend.js script which is designed to add a legend using a D3 scale.

To use this I first created a color scale:

And then I use the colorLegend function